Aryeh Neier received the Stockholm Human Rights Award on behalf of himself and of George Soros.

“In many ways, I don’t feel as though I deserve to be given an award for doing what I most wanted to do – but it is a great honor!”, said Aryeh Neier when accepting the Stockholm Human Rights Award on behalf of himself and George Soros at a ceremony in the Swedish Bar Association’s office in Stockholm on 29 November. 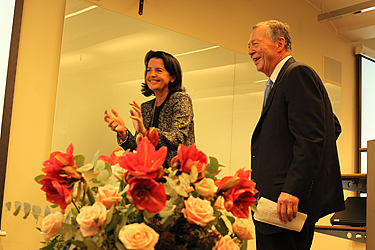 This was the third annual ceremony for the Stockholm Human Rights Award.

About 60 invited guests from the diplomatic corps, the Swedish judiciary, the legal profession and the academia were present at the award ceremony in the auditorium of the Swedish Bar Association.

Claes Zettermarck, chairman of the Swedish Bar Association, bid the guests welcome and reminded of the high standards required to become a recipient of the Stockholm Human Rights Award.

Christian Åhlund, secretary general of the International Legal Assistance Consortium (ILAC), declared how proud and honoured everybody was to have Aryeh Neier present at the ceremony. He addressed Aryeh Neier:

“Your life-long dedication to ground-breaking human rights work makes you exceptionally well-suited for the award.” 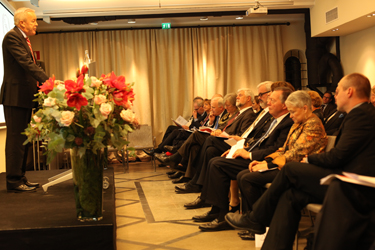 Christian Åhlund addressing the laureate Aryeh Neier in the auditorium of the Swedish Bar Association.

Mark Ellis, executive director of the International Bar Association (IBA), made reflections on the laureates George Soros and Aryeh Neier.

“It’s not an exaggeration to say that these two individuals through the Open Society Institute have created something that is as powerful in the area of human rights and the rule of law as any other organization or, for that matter, many countries in the world”, declared Ellis, and went on to state:

“In every corner of the world today, when you’re there, you will see the impact, the success of the Open Society Institute in a relative short period of time, and it’s because of the leadership of George Soros, and particularly of Aryeh Neier as chief executive, that this is the case.” 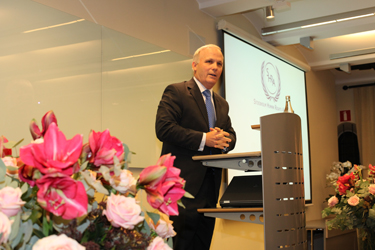 Anne Ramberg, secretary general of the Swedish Bar Association, presented the award to Aryeh Neier. In her speech, she called attention to Aryeh Neier’s and George Soros’s global leadership role in making governments accountable and transparent to citizens. She referred to recent development and pointed out how the number of democracies across the world has increased, and how repressive and authoritarian leaders are thrown out when people demand transparency, accountability and freedom of expression even in countries with long history of dictatorship.

“The need for support in establishing democracy was in a way the very origin of The Open Society Foundations being established by George Soros starting in 1984. The aim was to help countries make the transition from communism to democracy”, stated Anne Ramberg, who told that the Open Society Foundations have given away more than $8 billion to promote the rule of law and respect for human rights. 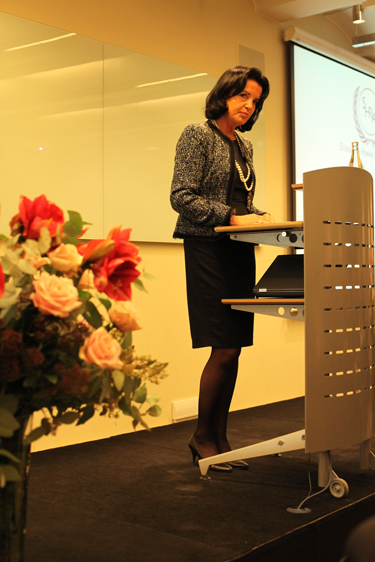 Anne Ramberg told about the important contributions of the Open Society Foundations within various areas of human rights all over the world, and outlined the life achievements of Aryeh Neier and George Soros.

Anne Ramberg outlined George Soros’s philanthropic contributions over more than 30 years in supporting an open society. She then addressed the laureate Aryeh Neier and summarized his many years of work for human rights in organizations like Human Rights Watch and the American Civil Liberties Union.

Anne Ramberg’s address to the laureates

Upon accepting the award, Aryeh Neier made a speech on The Role of the Human Rights Movement As a Factor in World Affairs. He noted that three movements became significant on a global basis about the same time in the 1970s: The international human rights movement, the women’s movement and the environmental movement. Aryeh Neier said that one could argue that the international human rights movement has perhaps been the most influential of those three. He described the impact of the human rights movement on world affairs in the shadow of the Cold War, when the struggle between East and West began to be regarded as a struggle between freedom and oppression, and how development continued in the 1970s through to the 1990s with large changes in Latin America, Asia, South Africa and the Soviet bloc. Aryeh Neier thought that the human rights movement has not subsequently had a geopolitical impact comparable to what it had in the 1980s and early 1990s, but it has continued to be a factor in world affairs. 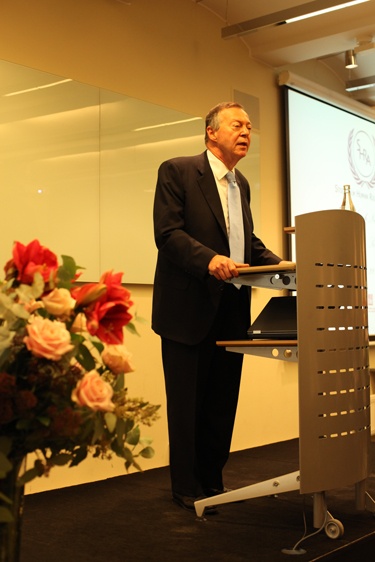 Aryeh Neier considered himself having had a privileged career, having been employed professionally for nearly a half century doing the things that he most like to do.

Aryeh Neier did not hesitate when answering Anne Ramberg’s question about the main threats to human rights today:

“The main threat is China!”

Aryeh Neier explained that not only does China limit human rights within the country, but it also has an impact on many other countries around the world. Part of Chinese foreign policy is offering commercial relationships to other countries without bringing pressures on democracy and human rights, as opposed to Western democracies, which may make such demands a condition for co-operation. 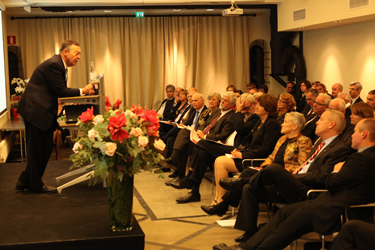 Aryeh Neier commented on questions from the qualified audience.

To Ambassador Jan Eliasson’s question whether the universality of human rights is threatened, when many third world countries remark that Western countries do not seem to care much about economic and social rights, only about civil and political rights, Aryeh Neier replied:

Aryeh Neier declared that he is an advocate of economic justice in the sense that he wants to see a wider distribution. But he pointed out that once one gets into economic issues, one has to engage in trade-offs.

“Rights trump every other concern. They’re not subject to negotiation or compromise!” he said. 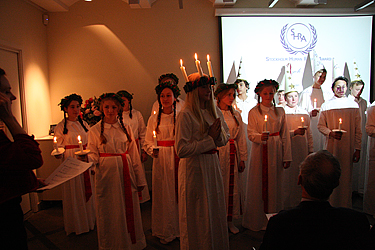