Cherif Bassiouni is sometimes referred to as the father of modern international criminal law. Born in Cairo in 1937, he has been central in the creation of every major instrument of international criminal law over the last fifty years, including the Apartheid Convention, the Torture Convention and the creation of the Rome Statute for the International Criminal Court, where he played a key role. More recently, however, he has expressed doubts about the future of the ICC, due to its exorbitant costs and bureaucratic overload. 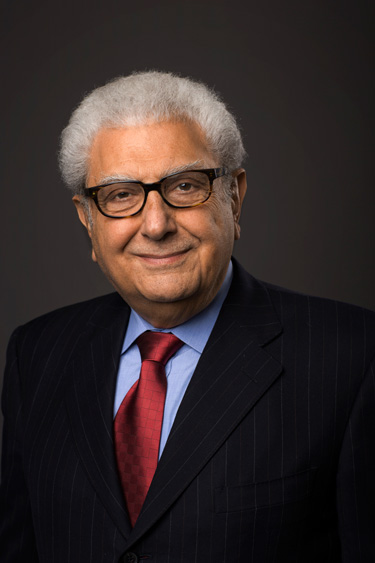 Cherif Bassiouni is a non-resident professor of law at the Cairo University and professor emeritus at DePaul University College of Law in Chicago, where he has taught international criminal law and human rights since 1964.

Cherif Bassiouni’s activities in support of international criminal law and human rights have taken him to all of the world’s recent major theatres of war, such as the former Yugoslavia, Afghanistan and Iraq. In various positions in the service of the United Nations, Cherif Bassiouni has documented war crimes and prepared prosecutions. In particular, Cherif Bassiouni played an important role in having sexual violence against women recognized as a war crime after the atrocities in Bosnia in the early 90s.

Cherif Bassiouni has also over the years been active in various attempts to bring peace to the Middle East. As an advisor to then Egyptian President Anwar Sadat, he was one of the architects behind the Camp David Accords between Egypt and Israel in 1978. More recently, he supported the Gaza Flotilla initiative in 2010 and in 2011 he was appointed by the King of Bahrain to head a commission (“the Bassiouni Commission”) with the mandate to investigate the violence during the period of unrest in Bahrain in February and March 2011. The commission’s report expressed criticism against excessive use of force and the use of torture by the Bahraini security forces. In the current conflict in Syria, Cherif Bassiouni has called for the UN to establish an investigation commission to collect evidence about war crimes to prepare the ground for future war crimes trials.