Mary Robinson received the Stockholm Human Rights Award at a ceremony in Berwaldhallen in Stockholm on 23 November.

The eighth Stockholm Human Rights Award was presented by the Swedish Bar Association’s secretary general Anne Ramberg at a solemn ceremony in Berwaldhallen, Stockholm on 23 November. This year, the award was conferred to Mary Robinson for her outstanding contributions in supporting democratic development and human rights.

Anne Ramberg presented the award, which comes in the form of a diploma and a glass sculpture.
Photo by Tom Knutson

In her role as president of the Mary Robinson Foundation – Climate Justice, Mary Robinson staunchly advocates global justice for people most vulnerable to the impacts of climate change – the poor, the disempowered and the marginalised across the world.

Mary Robinson was the United Nations High Commissioner for Human Rights from 1997 to 2002 and the seventh – and first female – President of Ireland between 1990 and 1997. 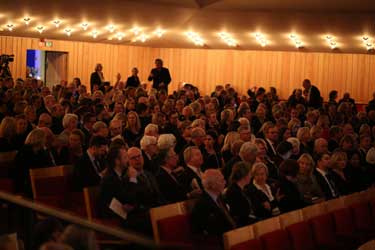 The Stockholm Human Rights Award ceremony gathered a large number of representatives from the diplomatic corps, the judiciary, the legal profession, the academia and from human rights organizations.
Photo by Tom Knutson

At the award ceremony in Berwaldhallen concert hall, about 1 000 participants were assembled, including Swedish cabinet ministers and representatives from the diplomatic corps, the judiciary, the legal profession and the academia.

Mary Robinson and her husband Nicholas Robinson in a conversation with Swedish Minister for Foreign Affairs Margot Wallström.
Photo by Tom Knutson

The Swedish Bar Association’s secretary general, Anne Ramberg, gave the welcome address. When introducing the laureate, she notably referred to Mary Robinson’s many contributions to human rights for the world’s poorest and most vulnerable people.

In her acceptance speech, Mary Robinson said that she was very honoured and humbled by the Stockholm Human Rights Award. She stated that the she did not really receive the award personally, but on behalf of all those who struggle for human rights.

Mary Robinson described her work for the people in the areas of the world most immediately endangered by climate changes.
Photo by Magnus Andersson

“It is a troubled time for our world. It is a time with too much hate speech, xenophobia, racism and sexism that should not be part of civilized society, but are increasingly part of the discourse in this very troubled time. In receiving the award in such a troubled time, I’m reminded of something very fundamental, which all of us working in human rights know all too well: It is, and always has been, a struggle. It’s to the people on the margins, those in the coalface of human rights, those who struggle so hard for human rights, that I dedicate this award”, said Mary Robinson at the ceremony. 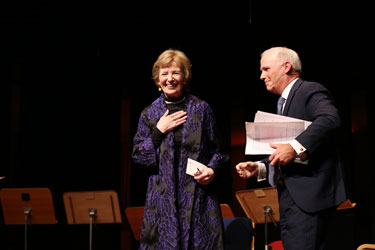 After her speech, Mary Robinson discussed political populism and demagogy, climate change, her driving forces and her longtime work for human rights with Mark Ellis, executive director of the International Bar Association (IBA). 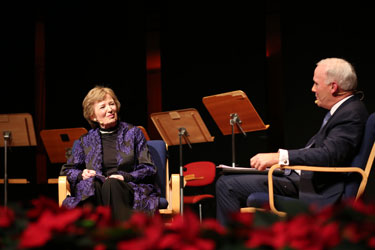 In her discussion with Mark Ellis, Mary Robinson particularly warned for populism and demagogy in the wake of the UK European Union membership referendum and the US presidential election.
Photo by Tom Knutson

“I’d like to ask you accept, on behalf of all of us, appreciation for everything you have done and everything you will continue to do, because the world needs leaders like you”, said Mark Ellis, concluding the questions and answers session.