Thomas Buergenthal received the Stockholm Human Rights Award at a ceremony in Berwaldhallen in Stockholm on 20 November.

The tenth Stockholm Human Rights Award was presented by the Secretary-General of the Swedish Bar Association, mrs Anne Ramberg, at a solemn ceremony in Berwaldhallen, Stockholm on 20 November. This year, the award was conferred to Thomas Buergenthal, professor of law and judge.

Watch a video film of the award ceremony: 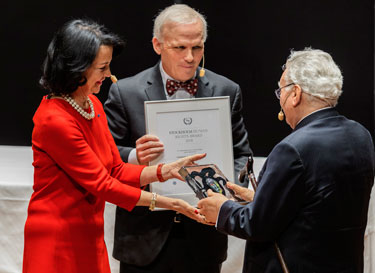 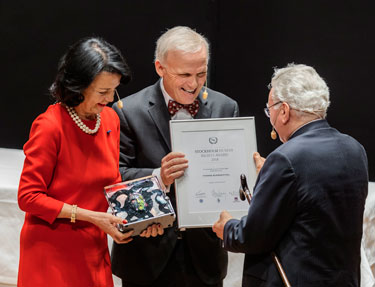 At the award ceremony, Thomas Buergenthal received the Stockholm Human Rights Award, which comes in the form of a glass sculpture and a diploma, from Anne Ramberg, assisted by IBA’s executive director Mark Ellis.
Photo: Micke Lundström

Judge Buergenthal’s long and distinguished career as an international jurist was shaped early on by his experiences as a survivor of the Auschwitz and Sachsenhausen concentration camps. Over a period spanning more than half a century, he has served as a judge and taught at several leading law schools. 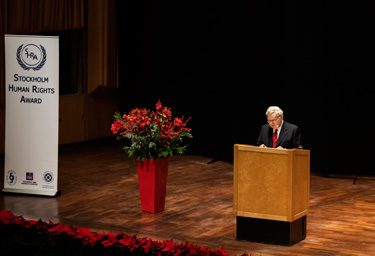 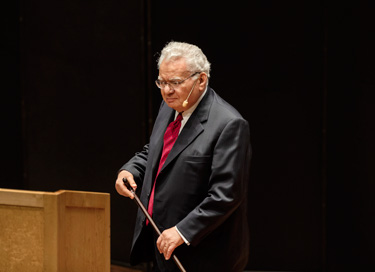 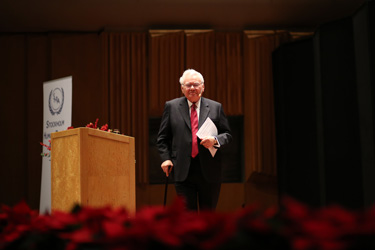 The Swedish Bar Association’s secretary general, Anne Ramberg, gave the welcome address. She reminded the auditorium that true democracy must be based on the rule of law and the protection of human rights – values which are at present being challenged and threatened in Sweden and internationally. The laureate Thomas Buergenthal is an international leader and advocate for human rights, and he has exceptional personal qualities, said Anne Ramberg.

In his acceptance speech, Thomas Buergenthal said that he was profoundly honoured and deeply moved to have been named the recipient of the Stockholm Human Rights Award. He said that being added to the list of prior recipients of this award, all eminent individuals and highly respected institutions committed to the universal protection of human rights and the promotion of international criminal law, had a very special meaning to him, and that was particularly heartened by the decision conferring the 2017 award on the International Criminal Court.

Thomas Buergenthal expressed concern about hatred and populism spreading in the world, but he said that we should not abandon the struggle to make it possible for our children and grandchildren to live in a better world.

During a Q&A session, Thomas Buergenthal talked with Mark Ellis, executive director of the International Bar Association, IBA, about how his life and achievements had been marked by his childhood experience of the Holocaust, but also about the development in the world and how that can be turned around. Thomas Buergenthal expressed strong frustration over the development in his beloved home, the United States, where the respect for human dignity, for the rule of law and for independent media are being challenged. But he was optimistic on this point as well, and hoped that Americans would be able to break the trend. 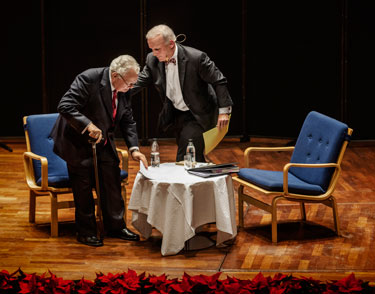 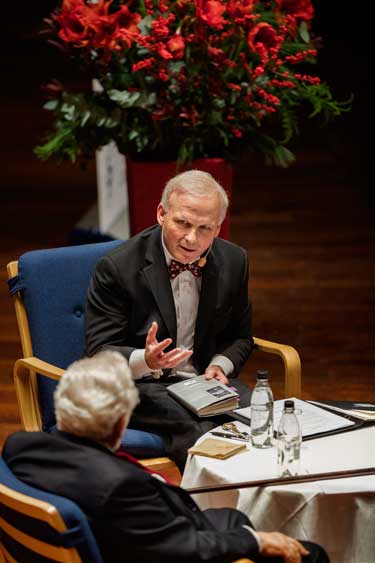 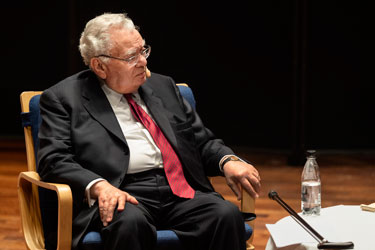 In the Q&A session with Mark Ellis, Thomas Buergenthal gave a frank view on the development in the USA and in other parts of the world.
Photo: Micke Lundström

Following a long ovation for the laureate Thomas Buergenthal, IBA’s executive director Mark Ellis surprised the auditorium by paying homage to Anne Ramberg, the secretary general of the Swedish Bar Association, who will retire next year. Anne Ramberg is one of the initiators of the Stockholm Human Rights Award. Mark Ellis notable lauded her bold struggle for the rule of law and human rights. He presented the IBA Leadership Award to a surprised Anne Ramberg, who said she was deeply honoured and happy about receiving the award. 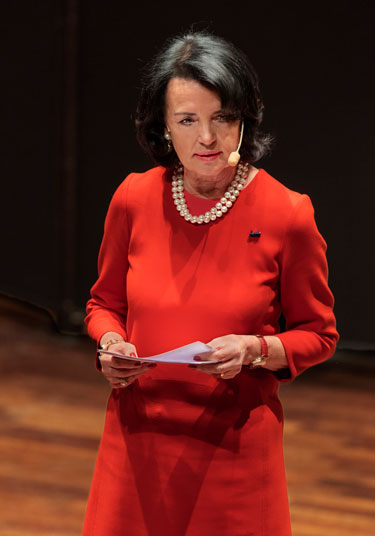 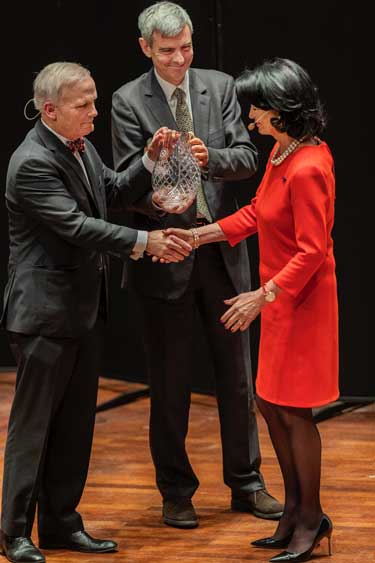 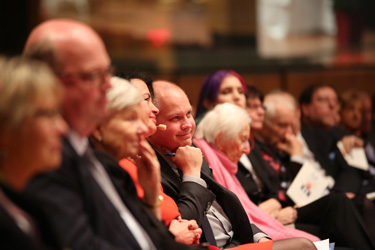 The Swedish Minister of Justice, Morgan Johansson, was present at the ceremony; seen here with Anne Ramberg.
Photo: Tom Knutson 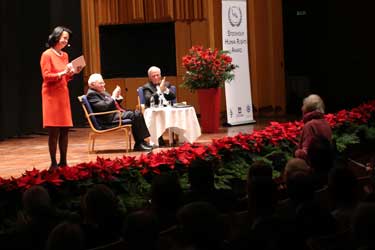 A special tribute was paid to 94-year-old Hédi Fried for her achievements in disseminating knowledge about the Holocaust.
Photo: Tom Knutson

Vocal group Ensemble Åtta sang three numbers, finishing with young Swedish composer Jacob Mühlrad’s Kaddish. Mühlrad’s composition sets out from Kaddish, the Jewish prayer commemorating those who passed away. But it also contains a fictive dialogue with Mühlrad’s grandfather, who survived the Holocaust. 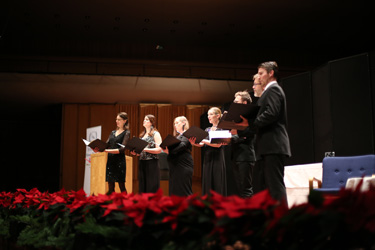 A large number of invited guests from the political sphere, the judiciary, the Government services, the legal profession were present at the ceremony in Berwaldhallen, as were leading advocates of the rule of law.

Other survivors of the Holocaust were also present at the ceremony, among them psychologist Hédi Fried, to whom secretary general Anne Ramberg paid a special tribute at the end of the ceremony. Anne Ramberg thanked Hédi Fried for over the course of her life having related her experiences and having emphasized the responsibility of all humans to make sure that history will not repeat itself. 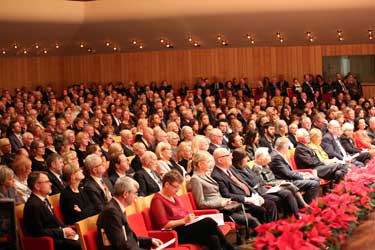 A large number of guests had gathered for the ceremony in Berwaldhallen.
Photo: Tom Knutson

Thomas Buergenthal’s judgeships include the Inter-American Court of Human Rights, which contained a term as its president, the United Nations Human Rights Committee and the International Court of Justice.

A widely respected scholar, Judge Buergenthal has held many professorships and academic positions, including his present position as Lobingier Professor Emeritus of Comparative Law and Jurisprudence at The George Washington University Law School, where he has taught international law and international human rights law, and Dean of Washington College of Law of American University.

An author of numerous articles on international law and human rights, Judge Buergenthal has written more than a dozen books, including his memoir A Lucky Child: A Memoir of Surviving Auschwitz as a Young Boy, in which he recounts his journey from the Nazi concentration camps to liberation and his reunion with his mother following the end of World War II.

Watch a clip from the award ceremony: