David Miliband and the International Rescue Committee received the Stockholm Human Rights Award at a ceremony in Berwaldhallen in Stockholm on 4 November.

The eleventh Stockholm Human Rights Award was presented by the Secretary-General of the Swedish Bar Association, Mia Edwall Insulander, and the President of the International Bar Association (IBA), Horacio Bernardes Neto, at a solemn ceremony in Berwaldhallen, Stockholm on 4 November. This year, the award was conferred to David Miliband and the humanitarian aid body that he heads, the International Rescue Committee (IRC). 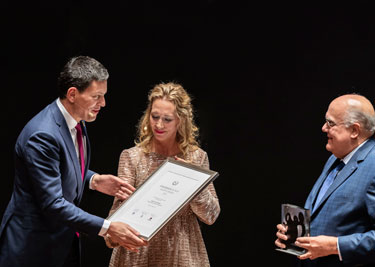 Mia Edwall Insulander bid the laureate and the guests welcome to the award ceremony and introduced the laureate. She observed that today, the rule of law and human rights are subject to several threats, notably by protectionism, nationalism and populism, but also by escalation of risk for military interventions in conflict areas, environmental pollution and climate change. 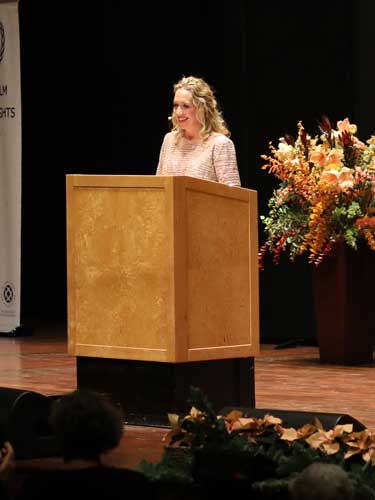 Mia Edwall Insulander gave the welcome address and told about the background of David Miliband and the International Rescue Committee.
Photo: Tom Knutson

David Miliband said that he was delighted to accept the award, on behalf of 13,000 IRC staff and 15,000 volunteers working in more than 40 countries and 190 field sites around the world. He noted that the IRC, an organization founded to rescue Jews from Europe in the 1930s, is now working with half of its field sites in Muslim majority countries. 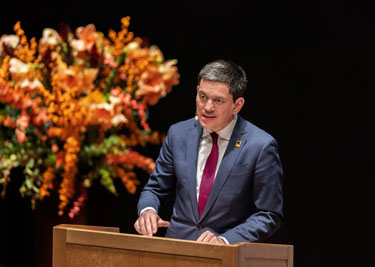 “My message tonight is that we need your help to defend and uphold the regime of human rights that defined the ambitions of the second half of the 20th century. Today we face a triple emergency around the world, and that makes tonight’s award all the more poignant and important. It is not just an honor. It needs to serve as a rallying call”, said David Miliband.

“This award is important in highlighting these challenges”, said David Miliband.

David Miliband also revealed that the IRC is starting activities in Sweden, with an office in Stockholm and a website in Swedish: www.rescue-se.org. 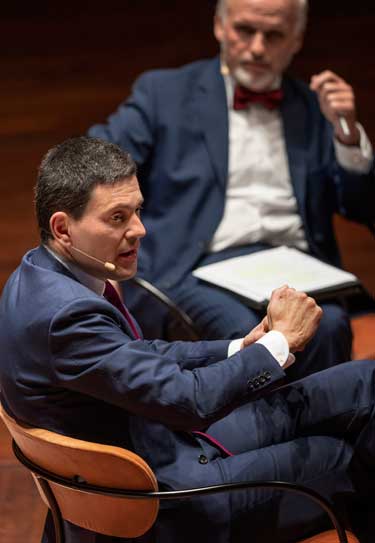 Miliband also warned against focussing too much on the enormous problems we are facing. The risk is such an outlook creating a sense of resignation, he said. Instead, it is important to emphasize the solutions and resources that actually are there.

Mark Ellis also addressed the developments in Miliband’s native United Kingdom, and asked whether they are not running in the same direction as the protectionism and nationalism characterizing Trump’s United States. David Miliband, himself an anti-Brexiteer, agreed to this and noted that British democracy, whether or not Brexit is carried through, will need a long process of repair. 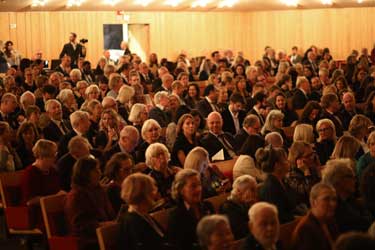 Berwaldhallen i Stockholm was filled with guests for the award ceremony.
Photo: Tom Knutson

A large number of invited guests from the political sphere, the judiciary, the Government services and the legal profession were present at the ceremony in Berwaldhallen, as were leading advocates of the rule of law. 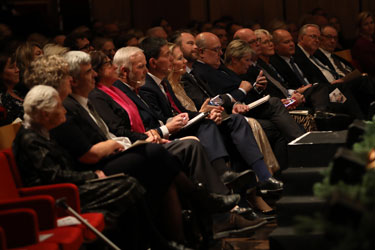 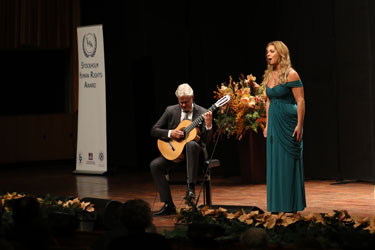 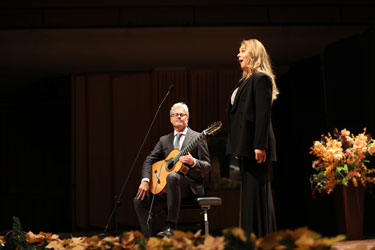 About the IRC and David Miliband

In 2018, the IRC and its international partners assisted 2,175 children and parents seeking asylum in the USA and resettled 5,374 refugees and Special Immigrant Visa recipients across 25 cities. In addition to its ongoing work in the USA, the IRC provides clean water, shelter, health care and education to people in conflict-stricken countries including Myanmar, Syria and Yemen.

As the child of Jewish refugees who fled to the United Kingdom in the aftermath of the Second World War, David Miliband has a personal interest in supporting those who are displaced by crisis.

David Miliband was Member of Parliament for South Shields 2001–2013. In 2006, Mr Miliband was appointed Environment Secretary. From 2007 until 2010, he served as Secretary of State for Foreign and Commonwealth Affairs.

About the Stockholm Human Rights Award

The Stockholm Human Rights Award was established in 2009 by the International Bar Association (IBA), The International Legal Assistance Consortium (ILAC) and the Swedish Bar Association. The award is given annually to an individual or organization for outstanding contributions to human rights and the rule of law. 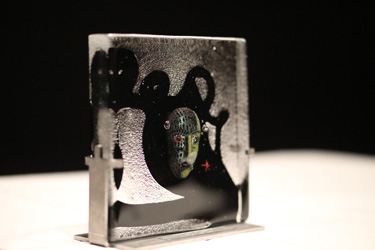 The Stockholm Human Rights Award, which comes in the form of a glass sculpture and a diploma, is given annually to an individual or organization for outstanding contributions to human rights and the rule of law.
Photo: Tom Knutson

Watch a clip from the award ceremony: