Thomas Buergenthal to be honoured with 2018 Stockholm Human Rights Award.

Thomas Buergenthal is the 2018 Stockholm Human Rights Award laureate. Having devoted his career to the protection and promotion of human rights and international law, Judge Buergenthal will be honoured at a ceremony in Stockholm, Sweden on 20 November 2018. 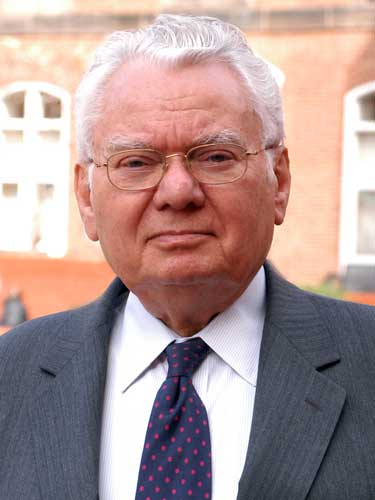 Judge Buergenthal’s long and distinguished career as an international jurist was shaped early on by his experiences as a survivor of the Auschwitz and Sachsenhausen concentration camps. Over a period spanning more than half a century, he has served as a judge and taught at several leading law schools. His judgeships include the Inter-American Court of Human Rights (1979–1991), which contained a term as its president; the Inter-American Development Bank's Administrative Tribunal (1989–1994), which also included holding the role of president; the United Nations Truth Commission for El Salvador (1992–1993); the United Nations Human Rights Committee (1995–1999); the International Court of Justice (2000–2010); and the IBA Inquiry on Crimes Against Humanity in North Korean Political Prisons (2016).

A widely respected scholar, Judge Buergenthal has held many professorships and academic positions, including his present position as Lobingier Professor Emeritus of Comparative Law and Jurisprudence at The George Washington University Law School, where he has taught international law and international human rights law (1989–2000; 2010–2015); Dean of Washington College of Law of American University (1980–1985); and endowed professorships at the University of Texas at Austin and Emory University, where he was also the Director of the Human Rights Program of the Carter Center.

Judge Buergenthal has also served on the Ethics Commission of the International Olympic Committee; as Honorary President of the Inter-American Institute of Human Rights in San José, Costa Rica; and is a former Chairman of the Committee on Conscience of The United States Holocaust Memorial Museum, the United States’ national institution for the documentation, study and interpretation of Holocaust history.

An author of numerous articles on international law and human rights, Judge Buergenthal has written more than a dozen books, including his memoir A Lucky Child: A Memoir of Surviving Auschwitz as a Young Boy, in which he recounts his journey from the Nazi concentration camps to liberation and his reunion with his mother following the end of World War II. The book has been translated into more than 12 languages.